No, not ‘Sampler Album Quilts,’

This is my first Fabric Book 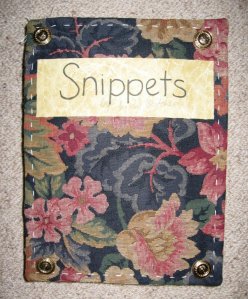 I decided to make a textile book, and started looking for bits and pieces to use rather than start from scratch.

The one thing I was looking for was a ‘page’ of crazy patchwork I did while we lived in Snowtown in 1988, when I belonged to the NYP Quilters, and one of the members, Doris Kennett, offered to show us some of the basics of crazy patchwork.

Two of those would fit on a page.

The search also turned up a cross stitch of a native violet which I had forgotten about, and though it was a bit big, it would become another page. 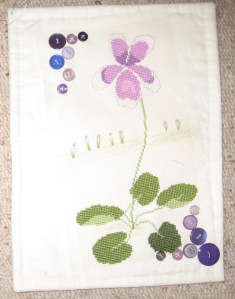 I wanted to include a sample of one of the mini cross stitch kits I designed and packed to sell at craft fairs in the early 1990s, and most had been glued onto the pages of a folder with all the designs and requirement lists, but one had been missing when I put the folder together.

I found the sample of crazy patchwork, but by now I was on a roll, so kept looking to see what else would turn up. 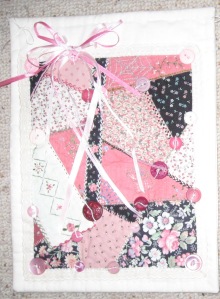 I opened an unlabelled shoe box. and found a heap of Stringpetts, little dolls I had designed with string arms and legs, which had never been finished. Three of them would fill a page.

Another box held some leftover fans made up but not used in ‘Fans for Midori”, and one of them was trimmed to fit on a page, along with a fabric brooch made about the same time as that piece of crazy patchwork. 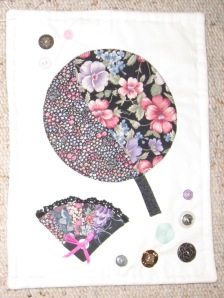 A tin contained leftover bits and pieces of several fused applique projects, and I found parts of three different projects which could be used together,. to make a very original design, using a waratah flower from ‘Bush Garlands’ along with leaves from a William Morris Workshop tutored by Michelle Hill, joined together with a strip left over from my original design ‘French Onion.’ quilt 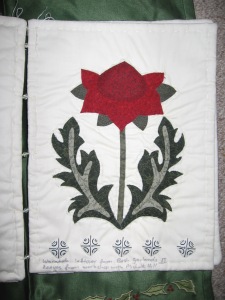 A bear which didn’t fit on the ‘You Can’t Have Too Many Bears’ wall hanging was joined on the inside of the back page by a doll prepared for hand applique leftover from the still unfinished 3D dolls quilt, a raw edged heart not used on a series of dolls which held their hearts in their hands, and another heart cut from a scrap of a machine quilting practice piece.…….

The scraps of wadding were starting to run out, so a handful of buttons was added to each page, and samples of furnishing fabric became the covers.

It was joined together with a stitch which I think I invented which allows the pages to open flat, with beads between the pages so that it doesn’t bulge instead of sitting flat when closed

This is my first fabric book, but it won’t be my last. I will have to do a button sample book, a fabric sample book (like the ones we did in Home Ec. at school), more sample books with future finds (after I fill up the backs of the pages of the first one perhaps), special edition pattern books, a photo album printed on fabric, lace sample book, a book of stitcheries, ………..

all the materials for these are in the sewing room just waiting for me to use!