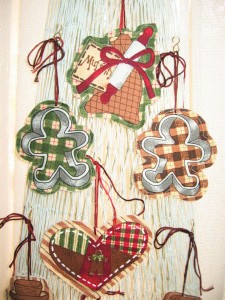 A few years ago I acquired a piece of net. I thought it might make a hammock for a doll. It became just another bit of the clutter in the sewing room, but didn’t take up much space, so just got squeezed into a corner and stayed there well after I decided none of my dolls, or even the bears, needed a hammock.

Earlier this year we helped to cleaned out a friend’s house, and I claimed a rolling-pin. Mind you, I try to avoid cooking, and I already had a rolling-pin, so I claimed it purely because I was thinking I could use it without soiling it with food!

One day I took out the net, and hung one end on a hook, and pulled out the bottom, and it became a triangle … and pretty much any triangle looks like a Christmas tree to me … so … something to hold the bottom out a bit was required. The rolling-pin was waiting for me to work out how the attach some cookie cutters to it to hang in the kitchen … but then the two ideas meshed into one.

The border motifs from a panel (which had already become a swag) needed something to hold them up, and the net was available, along with that lovely old rolling-pin.