I started dabbling with cross stitch in the mid nineties, and designed and stitched ‘Quilt while you are ahead’ surrounded by block designs, and thought it would be a great design to sell as a pattern.

I got myself a cheap little cross stitch program for the computer, then designed a small project, stitched it (making heaps and heaps od changes as I worked), created the computer generated pattern sheet (and tried not to make more changes as I corrected the design to match the real thing), and put together the Aida cloth, threads and a needle. 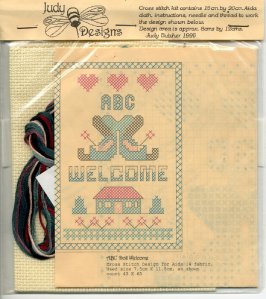 That first kit had a Sunbonnet Sue type doll and was called ABC Doll Welcome. A few sold so I tried some more, and eventually had about twenty designs available. Most were sold at craft fairs, some through Harvest Corner and Copper Country Keepsakes and through a few quilt shops, Country Craft and Fabric, Minlaton, in particular.

The hardest part was making up the samples. I designed on the computer, but then kept making changes as I worked them up, and made more adjustments when I corrected the version in the computer. Eventually I asked for help, and Ruth Collison and Roeli Gutsche made up samples for me. They followed patterns much better than I would, and let me know if the amount of thread I included was enough into the bargain.

I started the ‘Quilt while you’re ahead’ pattern several times, but kept changing the design as I had stitched it, and then the computer died. Several other projects also stayed as ‘one of’ originals rather than pattern samples.

I have tried a couple of cross stitch programs on the new computer, but haven’t found one which I like as much as the original one, and have put all the master copies and samples in a folder for the archives. 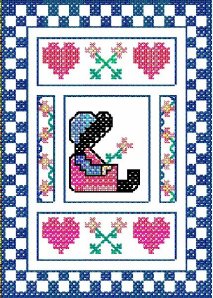 (The archives are the bottom drawer of the filing cabinet, or the bottom shelf of the wall unit in my sewing room. Somewhere in there anyway.)