A few years ago I acquired a piece of net. I thought it might make a hammock for a doll. It became just another bit of the clutter in the sewing room, but didn’t take up much space, so just got squeezed into a corner and stayed there well after I decided none of my dolls, or even the bears, needed a hammock.

Earlier this year we helped to cleaned out a friend’s house, and I claimed a rolling-pin. Mind you, I try to avoid cooking, and I already had a rolling-pin, so I claimed it purely because I was thinking I could use it without soiling it with food!

One day I took out the net, and hung one end on a hook, and pulled out the bottom, and it became a triangle … and pretty much any triangle looks like a Christmas tree to me … so … something to hold the bottom out a bit was required. The rolling-pin was waiting for me to work out how the attach some cookie cutters to it to hang in the kitchen … but then the two ideas meshed into one.

The border motifs from a panel (which had already become a swag) needed something to hold them up, and the net was available, along with that lovely old rolling-pin.

Printed the picture of Moonta Bay Jetty as an experiment,

did the quilting as a practice before starting to quilt a large quilt,

for the gift swap at the 2006 Gumtree Quilters Christmas Party.

Of course, I did the binding at the last minute

and had to find the wrapping paper,

have a shower and get to the party in a hurry, and forgot to take a photo,

but with the wonders of modern technology I have put together

something like it for the sake of these records. 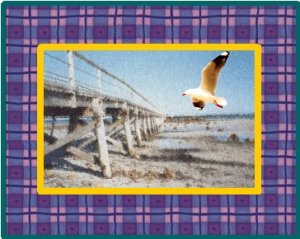 The seagull was photographed at Office Beach, Wallaroo,

and was added to the picture after borders,

and in the real thing it is larger

and placed partly over the border..

In August, 2005 I borrowed a book from Glenice called

I saw a quilt featuring a monogram which included all the letters of the alphabet,

and started playing with the idea immediately.

It was twelve months before Glenice got her book back!

In July 2006, at the Golden Harvest Quilters Hi-Fibre Retreat,

I started cutting fabric to try the ideas in a wall hanging.

The panel was completed that weekend.

It was bordered, sandwiched, quilted and bound in November 2006.

The title came about because people wanted to know what it said.

My answer is that you can read into it whatever you like.

Every English word is there, even the swear words,

if you look hard and find the letters in the right order.

Glenice was laid to rest soon after we moved from Bordertown to Crystal Brook,

Michelle called me a few weeks later to let me know that there would be a garage sale to clear some of the contents of the stash.

I selected a variety of items from what was on offer, including the book!